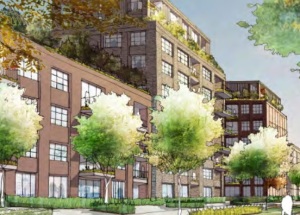 A massive increase in the scale and height of the flats planned for Benedict Wharf has been unveiled by SUEZ.

The existing proposals for 600 homes were already the largest in Mitcham for a generation.

There is nothing like them anywhere in the area and they wilfully ignore the feedback which the local community has provided for over two years. Even Merton Council’s own Design Review Panel considered giving them a RED rating before deciding on AMBER.

The extra development responds to an intervention from the Mayor of London and is a quid pro quo for him allowing SUEZ to change Benedict Wharf out of industrial use. The Mayor has told SUEZ to jump and the answer to “How high?” is 10 storeys.

Despite SUEZ’s promises to involve the community in design workshops over any major changes to the plans, they have been imposed upon us. SUEZ’s stated commitment at the start of this process to securing its legacy in the quality of future development has been progressively diluted and is now wholly discredited. 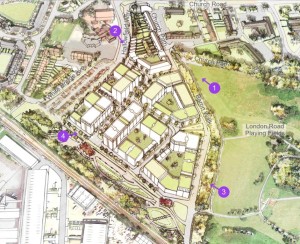 We believe the new development will feel placeless and not part of Mitcham.

It will also cause harm to significant heritage and other assets. As the images clearly show Mitcham Parish Church will be dwarfed by the tower blocks and London Road Playing Fields will face a wall of buildings.

We have presented alternative proposals for mixed-use gentle density and these have been ignored.

We believe the development at Benedict Wharf should respect the character of Mitcham and be led by an urban design vision that emphasises the importance of streets and affordable houses. It should be of a height that avoids visual intrusion, shadowing and encroachment on London Road Playing Fields and negative impacts on views from both Wandle Valley and Cricket Green Conservation Areas.

The quality of the scheme should be such that there is public pressure to include the whole site within a Conservation Area within 10 years. This would mark a fitting transformation of Benedict Wharf with its long history of “bad neighbour” uses and provide the positive legacy which SUEZ states it wants to leave for the site.

There is real concern now that the proposals have crossed a line.

We are questioning our support for residential use of this Strategic Industrial Land. We are dismayed to have reached this position, having done everything we can to work in collaboration with the landowner, SUEZ, and Merton Council, including jointly agreeing how the site should be earmarked for development in Merton’s emerging Local Plan.

The outline planning application for Benedict Wharf has come forward ahead of the Local Plan and we now consider it to be premature. We believe the best way forward is to review alternative uses for the site as part of the Local Plan review, including for strategic industrial use. It may be that with appropriate controls over hours of working and lorry routes, such that they avoid Church Road through Mitcham Cricket Green Conservation Area, an industrial use will be more appropriate than a massive overdevelopment of the site for housing.

What do you think? It’s a hard choice between difficult options.

Benedict Wharf is key to unlocking a much more significant development opportunity that embraces the car pound, Merton Council’s land along Hallowfield Way, Worsfold House (recently sold off to Clarion) and La Sporta. It is also adjacent to a potential tram extension or bus rapid transit route.

Given what has happened it is now clear that these issues need to be resolved together and through the Local Plan. We stand ready to contribute.