In common with many local authorities Merton Council uses a Design Review Panel to help it assess the design quality of new developments.

This is made up of external architects, urban designers, transport planners, landscape and other professional who review schemes, often well before a planning application is submitted.

We welcome design review. When operated transparently and well it can provide insight and support to raise the game in the quality of design. There are also risks, especially when it operates in a deep seated culture that views the role of the Design Review Panel as a closed group of behind-the-scenes advisors that stands separate from normal standards of public scrutiny or engagement.

Government policy is placing ever more emphasis on design quality and the role of design review and it also features in Merton’s new Local Plan. It is timely therefore to have Merton’s approach put under the spotlight by the Sustainable Communities Overview and Scrutiny Panel and we’ve drawn a number of issues and concerns to its attention in a detailed submission.

The bottom line is that Merton’s Design Review Panel is not fit for purpose.

It doesn’t meet the industry standard and Merton Council has chosen not to sign up to the Mayor of London’s Quality Review Charter.

Merton is an outlier in having the Chair of its Planning Applications Committee also as Chair of its Design Review Panel seemingly oblivious to the problems this causes.

There is evidence that Merton’s constitutional safeguards to prevent any conflict are being breached – including the then Chair of the Planning Applications Committee voting to grant planning permission for a development that was subject to design review at a meeting she also chaired.

The Design Review Panel has other failings including:

We’ve made 22 recommendations for reforms which will guarantee the probity of design review and ensure the Design Review Panel operates transparently and effectively. These can all be delivered in six months.

You can read our submission on the Design Review Panel here 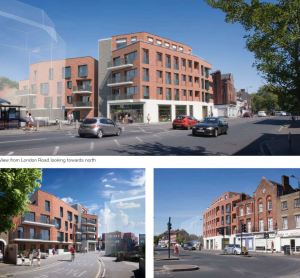 It is made up of architects, urban designers and others who review developments, usually before they become planning applications, and offer an overall judgement of their merit as being Red, Amber or Green.

The Panel’s views have a major influence on the Planning Applications Committee when decisions are made.

The essence of design review is that the Panel discusses the proposals together and collaborates in arriving at an overall view. This is clearly challenging during lockdown but we have been surprised and disappointed to find “meetings” on two key developments in Cricket Green – the design code for the 850 home mega scheme on Benedict Wharf and the latest flats plans for the KwikFit site (pictured) – have been undertaken by email.

We have teamed up with the architects behind the latest KwikFit plans to write to Cabinet Member Martin Whelton and Planning Committee Chair Linda Kirby to share our concerns and ask for changes to be made. Conducting design review by email works against the:

We believe these issues could be addressed during lockdown by adopting the same approach to online meetings as Merton Council has taken for Cabinet and Planning Applications Committee.

It also points to the opportunity for further strengthening the process post Covid-19, including the benefit of having an independent secretariat for managing the Design Review Panel so the views of officers and councillors who are also responsible for making decisions on planning applications are kept separate.

Last night Merton’s Planning Committee rejected plans to put a canopy on Fair Green in a decisive eight to one vote.

The canopy, initially presented as a covered market which could also be used for community events was seen as badly designed and not fit for the purpose intended. Even Merton’s own officers, in their report to the planning committee, admitted it was not suitable for community events.

The Council’s own Design Review Panel decision to give the canopy a Red rating last week played an important part. We reported on its meeting last week.

We were shocked to see how much the Merton Council’s planning officer appeared to be acting as an advocate for the project rather than supporting councillors by providing the  information needed for them to make a planning decision. It is very important when a planning committee is dealing with the council’s own developments for there to be a clear division between the council officers acting as developers and those servicing the planning committee.

It was very clear that the quality and timing of the application owed more to the availability of external funding than to providing a well designed and effective structure for Mitcham town centre.

Let’s be clear about our position. As our representative said a the planning committee we want Mitcham to be a success. We want to see thriving businesses, and Fair Green as a hub of activity. But like the Design Review Panel we think the canopy was poorly designed and ill conceived. As so many people said at the planning committee – Mitcham deserves better.

This committee includes architects and others who know about building design. Its role is to look at planning applications, either before they are lodged with the council or while they are live, and give guidance on their design quality.

On 31 October it looked, for the second time, at the proposals for a canopy for Mitcham market at Fair Green. This has been put forward by Merton Council as part of a much wider range of plans under the umbrella of Rediscover Mitcham.

Seen it all before

This time, because the canopy is now a live planning application, the Design Review Panel met in public. People were allowed to attend and observe – but not to speak. We had a representative at the meeting, and we can tell you what we heard.

Note as you read what follows that the official report is not yet published. It has to be written up by an officer of the council and then approved by the panel members.

What the Design Review Panel said

As you read our report of what the Design Review Panel said, bear in mind that it gives every application it considers a rating – green, amber or red. Green is good. No application wants to be rated red. Last time the market canopy got an amber rating.

These are some of the key points we heard at the meeting:

Despite being invited by the chair to say something positive about the canopy and to offer constructive support for the design, nobody on the panel seemed to have a good word for it.

The canopy was given a red rating.

We hope the notes of the Design review Panel meeting are written up fast, because the next step for the canopy is the Planning Applications Committee on 7 November.

We think it is vital that all the Councillors on the Planning Applications Committee see the full report to help inform its decision.

All this has happened, we think, because Officers want to rush the canopy through the planning system so they can spend the money to build it by the deadline that’s been imposed by the external funding source.

The shortage of time does not, in our mind, excuse bad practice, and we have taken our concerns up at the highest level within the council. Just as a member of the Design Review Panel said council builds should be of the highest quality, we believe council planning applications should be dealt with to the highest standards, and Merton council has fallen well short.

Although the official deadline for comments is 1 November, Merton council does tend to accept comments made after that, so if you feel strongly after reading this you may still contact the council and make your views known – but be quick as the planning committee meets on 7 November.

All the information you need on how to do this is at Merton Council’s web site, and the planning application number is 13/P2575.